Plays a sound effect, with optional volume and pitch inputs. Outputs the channel on which the sound is played. Use the settings to change which sound effect is played. 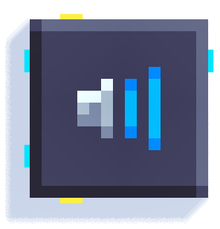 Unlike most other blocks, a wire connected to Before is required for it do do anything, it does not run automatically.

The rightmost setting displays which sound effect is played. Tap to change.

Checking Loop will make the sound repeat on the chosen channel until stopped with Stop Sound. A looping channel becomes occupied until it is stopped, meaning other Play Sound blocks will not choose that channel.