Traces a line between two points and outputs True if the line hits anything, the position of intersection, and the object it hit. (Think of it as a laser, you stand in the starting position and shoot a laser to the end position.)

Note that Raycast detects when the line hits the outside surface of a block. If the line starts inside the block then it will not hit that block when going out. Also, it won't detect an object that has been created in the same frame, you have to wait 1 frame after creating the object for Raycast to detect it. 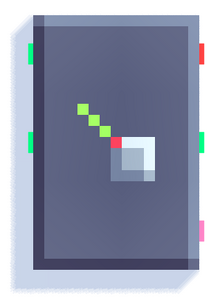